3. Learn from our historical building culture and way of life

The text is translated as Deepl.

1. Building guidebook for correct building and for the preservation of your health
2. Before you buy or plan a house.
3. Learn from our historical building culture and way of life
4. How to avoid and renovate a house that makes you ill!
5. Examples from other countries on how to renovate a house
6. The economic dwelling house

On the basis of the biggest pseudo-scientific fraud, the man-made climate warming 1), our houses must be hermetically sealed with plastic and glass wool. The result is residential houses, which make the inhabitants ill.

The elites want people not to reach this level of quality of life. Therefore not only numerous new building regulations are introduced, which worsen unnoticed the living environment and the quality of life. These affect not only unfavorably the health of the inhabitants but load directly or also indirectly also the environment. The Environmental Damage Act is a joke if 5G networks and wind turbines are installed. The facades will be covered with insulation panels, which will later be disposed of as hazardous waste.
These include most of the Low-energy house, so-called "ecological house", etc. There is enough space energy available to cover the relatively low energy demand of mankind without damaging nature to a great extent, as it is happening now. But in this case one could not sell windmills or solar panels. In the article Energy you can read more about the details. If mankind has enough cheap energy at its disposal, not only could the Sahara be transformed into a blooming landscape, but the people would be free and this must not happen under any circumstances. 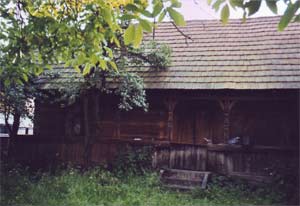 This 100-year-old wooden house in Transcarpathia is valuable because of its wood. It should be dismantled and put up again in another place.

The approach to building and living must be reconsidered. The present basic idea is that at 30-35 years of age you start a family and at 75-80 years of age you go to a nursing home. So a use of about 50 years, which corresponds to the durability of the lightweight building. The normative service life of solid buildings is 80 to 100 years. Of course, all of these residential buildings last much longer with appropriate maintenance and repair.

Constantly new residential requirements and changed building regulations, e.g. for energy saving, make several renovation and conversion measures necessary during the life of the residential buildings. In the past, buildings were constructed for generations mainly from natural materials such as clay or wood. For a very long time, the houses were used without extensive reconstruction. The energy life cycle should not end badly and the environmental balance is in any case better than the general assumption. Certainly an interesting research topic for a diploma thesis, which is not sponsored by the building materials industry. 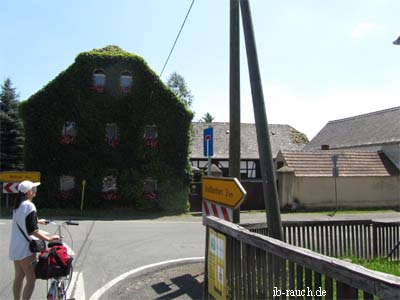 An example for the generation houses are the three-side houses in Saxony.

Years ago, the wage gap between city and country was about 30%, but in the meantime it has risen to 50%. Young, well-educated people are therefore attracted to the cities and innovative companies are naturally looking for their location where the skilled workers are. So everything is slowly rocking up. Whereby these differences are much greater in other countries, such as the USA, for example. In the cities, the cost of living is also much higher. But also the current measures of the green spirit of the times are directed against mobility (diesel bans, green zones, etc.) and rural life. Sometimes there is almost no public transport in rural areas except for a school bus. There is the project "Citizen buses", which is intended to complement the regular bus service.

Freelancers and start-ups are not necessarily professionally bound to the city where they live. For them, living and working in rural areas offers an alternative.

Man has to decide which is more important for him, the maintenance of his health or earning a lot of money which he later has to spend on the care of his diseases.

There is no possibility to change the nature. We have to accept our nature. An important question is what vision we want to have in the future and how we can shape it. To do this, we need to become subjects again and formulate and address a common concern in the community. The more different people are and pursue a common goal, the stunningly diverse the result will be.

Prof. Dr. Bernd Gerken represents in his video, Back to nature: Makes the waters wild again!, the view that man lives in nature and is a part of nature. Since we do not know exactly where we come from and who we are, this should be formulated differently. If man is a component of nature, he must be allowed to stay in nature on equal terms. If he is not a part of nature on this earth, he has to integrate himself optimally into it, without displacing the existing fauna and flora.

According to Gerken, many more nature reserves should be created. Nature does not have to be protected. Nature itself shows what is right and wrong. We only have to learn to understand nature again. At some point, the "environmentalists" will understand what kind of damage the dammed up rivers and wind draughts cause to the flora and fauna, just to name two examples.

One of the different ways of living is represented, for example, by the Anastasia movement. In Russia there are more than 250 family settlements and more and more similar settlements are being built in European countries as well, as shown in the video A New We, in family country estate or in another way of life in KoDorf. The KoDorf project mainly involves construction experts. In my opinion, historians, sociologists and other experts must also be involved in such a project. In the contribution the future of the cities, ideas are mentioned how the future of our living together could become again. 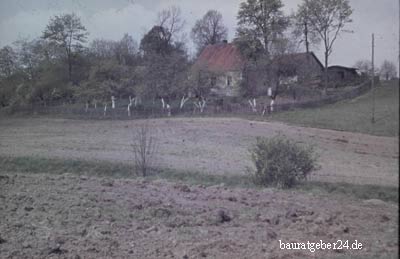 In the village in East Prussia on the property of my grandparents was the house, the barn and the stable, the garden, the field and a small forest. The field was bordered by a stream and a canal. It was similar to the family land settlements after Anastasia. (Picture 25 years later)

The following video bäuerliches Leben im Mittelalter should therefore only serve as a supplement to the historical communal action of the villagers.

All the mentioned living and living projects are in Germany unfortunately only one desire. Which are surely still organizational realizable. But by the greed for profit further nature is destroyed. Environmental poisons are entered into the earth and rivers, which then also comes into the food. By the economically and technically senseless wind power machines with the infrasound all biological beings are damaged or even killed and the regional biological balance is destroyed. The radio network will be played down and the already developed G5 network is very questionable for the nature and health of all living beings. These newly founded communities cannot escape all these influences if a radio tower or wind farm is erected on the community border.

Every person must decide for himself how he wants to live. The small plot of land about 2.5 hectares in size from my ancestors in East Prussia was similar. On the back of the property was a small forest, in the middle of the property was the house and the barn. At the front the field was bordered by a ditch and at the left side by a small lake. The daily hard physical work made my parents age very quickly. As long as we are not allowed to and cannot regain our real abilities, such projects are back to the natural way of life and nature without a meaningful connection to the modern infrastructure doomed to failure. In modern society we have simply forgotten how to survive in nature.

I think everything that does not correspond to our nature is harmful to us. Technology provides us with a pleasant (and lazy) life. One should therefore be careful and economical with technology.

Legends speak of past advanced civilizations, such as Atlantis. There are always constructions found on earth, which do not fit into the learned historical picture. Some archaeologists claim that there is a sunken bridge between India and Sri Lanka. Here maps from yandex. NASA has dated the "bridge" to 1.7 million years. Which is very close to the date in the old writings. In the vicinity of the village Delenkjur, far in Siberia, there is said to be a 3.5 million year old place [2], which has a similar ring-shaped construction as the 5,500 year old city of Arkaim in the Chelyabinsk region [3].

In the South African province of North Cape, in the Wonderwork Hollow, a fireplace installed by humans was found 1 million years ago.

Whether someone invests his or her assets in concrete gold is up to him or her. The bondage by the money (control instrument) causes dependence and lack of freedom. Everyone can choose between health and illness. Since we do not know our own fictitious history and our own origin (Darwin's theory [3], creation, descent of settlers from distant worlds, etc.), it is also difficult for us to orientate ourselves and to do the right thing, i.e. to create an optimal living and living environment.

Our lack of energy due to unfavorable housing conditions

One of the main problems of the present time is our lack of energy, a disturbed energy field of man. This causes depression, aggression and the inability of interpersonal relationships. Residential buildings made of natural building materials, such as wood, stones, clay or reed influence our energy field less negatively, but enable a harmonic vibration with the natural environment. Concrete buildings with their reinforced concrete structure create an energetic zero space. Barrier layers additionally prevent the exchange of information with nature.

Not only since today the philosophy of the elite or enlightened ones is based on duality, that is black and white or good and evil. Doubt arises from the two opposites of dualism. In the world of doubt, faith arises. Faith is not really knowing. It is very easy to spread untruths and to direct and control grey masses of people. First and foremost are school and university dropouts with their half-knowledge, who try to push their knowledge into the corner. Current examples are the fight against the climate deniers, fine dust deniers etc.

The propaganda about the possible consequences of the dying forest, the bird and swine flu or the hole in the ozone layer should still be remembered. The most recent case is the lack of drinking water, with the goal of the EU-wide privatization of the drinking water supply. Water is needed by every human being and the animals and therefore all living things can be controlled without problems. Even in the deserts there is enough water in the air, which is technically relatively easy to obtain today. Normally nobody on earth needs to suffer from lack of water.

1) "He who does not know the truth is merely a fool. But he who knows it and calls it a lie is a criminal!" Bertolt Brecht.

Teil 1: If you renovate your house or apartment ecologically.
Teil 2: Learn from our historical building culture and way of life.
Teil 3: How to avoid a house that makes you ill?
Teil 4: Examples from other countries for the renovation of a house.