Energy saving and the renovation of old residential buildings.

For thousands of years, residential buildings have been built in an energy-saving manner. One has to consider the entire energy flow of a building. In other words, from the extraction of raw materials, use, maintenance and recycling or disposal. These conditions are best fulfilled by natural building materials in conventional building style. 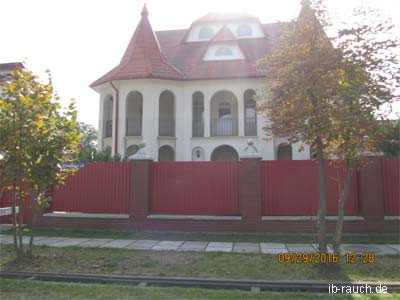 A new home for the family in the Ukrainian Carpathians

The insulation lobby in the form of the Gesamtverband Dämmstoffindustrie (Insulation Industry Association) and the Fachverband Wärmedämmverbundsysteme (Association for External Thermal Insulation Composite Systems) speak of possible heating cost savings of around 50 percent through external wall insulation. According to calculations by the Association of Private Building Owners (VPB), at least 70,000 euros would have to be invested in the renovation of an older single-family home to meet the requirements of the EnEV. According to the calculations of the President of the Federal Association of German Housing and Real Estate Companies, Axel Gedaschko, the monthly rents would increase by 2.20 euros per m2 if an old building were renovated in accordance with the EnEV specifications of a residential building from the 1960s. In contrast, optimistic assumptions would result in energy cost savings of at most 70 cents. Even according to the statements of the nationwide heating mirror, thermal insulation only contributes 12% to energy savings.

No sensible businessman would invest in such a loss-making business. In a small tool you can find out why this is the case and where you can save energy costs with little effort in your residential property.

In addition, a thermal insulation composite system with polystyrene boards pollutes the environment and accumulates in the organism. The polystyrene panels contain approx. 7 g of flame retardant HBCD (hexabromocyclododecane) per kg of carrier material. According to the European Chemicals Agency, HBCD is considered "of very high concern" and therefore the United Nations has decided on a global ban on HBCD. This chemical is suspected to have an adverse effect on reproduction. These polystyrene sheets must therefore not simply end up in landfill sites, but must be disposed of at great expense. [2] From spring 2016, these insulation boards will be classified as hazardous waste according to the Waste Catalogue Ordinance! [3]

A German architect has to know about 27,000 regulations when planning. If some of them are not correctly observed, such as the stricter requirements of the Energy Saving Ordinance 2016, penalties may be imposed. Similarly, this also applies to wood preservation. If the carpentry firm complies with the client's wish not to install any poisons in the house, the company carrying out the construction work makes itself liable to prosecution. Surely every planner can give numerous examples from his practice how he is restricted in his work. What is then also surprising that simple standard houses are built in Germany. These sand-lime brick houses with 10 cm styrofoam are called town houses. Such beautiful individual houses could be built. Of course, natural houses as they were built in the past would be even better.

The newly invented industry of climate protection, has nothing to do with the environment, but with the sale of eco fuel E10, solar systems, wind farms, trading with certificates and facade insulation. A billion dollar business for selected corporations and additional tax revenues. The world's largest industries include the weapons industry and the chemical, oil and pharmaceutical industries. Some of the methods used in the pharmaceutical industry have been uncovered and are described in the article Health Guide and Health Concept. Slowly, the methods of the energy lobby are also being uncovered. The Italian Mafia has already recognized the business with German wind farms. Already today one can see that not everything is working out as planned. See the decline of the German solar industry or the durability of wind power machines is 12 instead of the planned 25 years. But in a few years, due to a lack of scientific and engineering knowledge, politicians would like to convert power generation to 100% renewable energy [1] So, if there is no sun or wind, there is no electricity.

On the basis of my theoretical elaborations, my practical experience as an expert, I distance myself as an engineer and economist from the current interest-related construction policy in the FRG. These wishful thinking does not stand up to economic or ecological criteria in deep examination. Selected standards and legal regulations create a room climate rich in pollutants. This climate endangers the health of the inhabitants in the long term. Besides an unfavourable choice of building materials and an unsuitable building construction, the low air exchange is responsible for this.

Particularly when renovating old buildings, subsequent thermal insulation is only rarely economical. In some cases they can have an investment period of up to 25 years. No businessman with an economic mind would invest. A subsequent heat insulation to an uninsulated attic, on the other hand, is cheaper and more effective. Through legal coercive measures, such as the energy pass or the tightened energy saving regulations, citizens are forced to obediently save energy. Under the guise of CO2 building refurbishment (as much insulation as possible, see Unit of heat-transfer calculation), applications for subsidies can be made within the framework of the new requirements of the EEWärmeG, EnEV, EnEG and the economic stimulus package. There are various subsidy programmes to choose from. The energy savings of passive houses were compared in a new trial. Let the result surprise you. 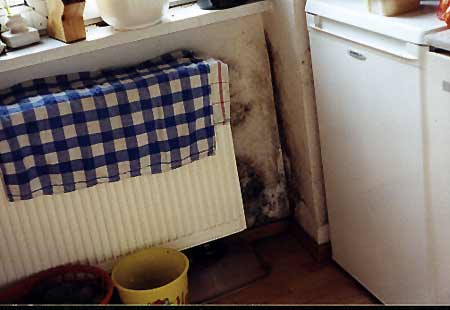 The cause of the massive mould formation in an apartment in Erfurt was the high humidity as a result of the turned off heating and also wall humidity due to a wrong constructional design.

Unfavourable energy saving causes humidity by condensation and a possible mould formation. (Cooler air absorbs less water vapour, the relative humidity increases). A temperature control of the rooms and especially of the cool wall surfaces is also urgently necessary in winter. Lowering the temperature at night with solid wall constructions does not save energy. The inner wall surface becomes more humid due to the lower room temperature and thus conducts the heat better to the outside. In addition, a porous damp wall construction material has a greater heat storage capacity.

Saving thermal energy causes an increase in humidity in the apartments and promotes the formation of mould. Low room temperatures and inadequate ventilation lead to an increase in humidity in the living space. This favours the formation of mould and leads to health problems for the occupants. This already affects every second apartment. Forecasts predict electricity costs of 50 Ct./kWh for 2020. Every modern heating system requires electricity. In the past, the prices of all energy sources were linked. If electricity costs rise, the prices for oil and gas will also rise. Approximately 70% of mould damage occurs in the bedroom because the heating is switched off. A temperature control of the rooms and especially of the cool wall surfaces has to be done also in winter. If this is not observed, visible mould damage in the apartments will be the norm in the future. However, there are also structural damages caused by floods. The consequences are mould, mould stains, wet walls - every owner of an old building knows these problems. It is therefore advisable to take out affordable policies for homeowners' and household insurance to prevent and ease the financial burden in this situation.

For the almost 570,000 Hartz IV requirement communities in Saxony, Saxony-Anhalt and Thuringia, the 321.80 euros per year for electricity provided for a one-person household is not enough. Compared to the cheapest provider in Saxony, his household is missing 113 euros per year. For a family of four in Saxony, this means a theoretical electricity debt of up to 524 euros per year. Money which the family has to save elsewhere, for example on healthy food, for the children or on heating, with consequences for health. See study Electricity costs Hartz-IV on MdR.

My observations in expert opinions show that especially in families with normal or low income there is an increase in mould and pollutants in the apartments. Here is a contribution in Stern, according to which low earners in Germany die earlier.

"The nuclear phase-out is not the energy turnaround, but the reason for it," said Mr. Dirk-Uwe Klaas CEO of the Bundesverband Deutscher Fertigbau (BDF) in the FAZ on 24.6.2011. In this document by Prof. Dr. Alt you can read about the consequences and effects of energy(pdf).
Especially those who fall for the climate lie would be recommended to visit Transcarpathia. Here there is clean air due to total de-industrialization, due to Gorbachev's economic incapacity. Power cuts and limited water supply in the cities are the order of the day here. Life expectancy is about 5 years less than in the FRG. Here the politicians, who are subject to the green spirit of the times, can experience their planned romantic future in practice, before they transfer the large-scale field trial into the final phase.

1. The current building trend is determined by the eco-industrial complex.
2. Energy saving and the renovation of old residential buildings.
3. What is an energy saving house?
4. The policy provides for houses and flats that make people ill.
5. Which is the right residence?
6. Build a house ecologically and economically.
7. The building culture and construction
8. If you build your own home, then the building laws must be observed!
9. A home of our own for the protection of our family and our health or just a capital investment?
10. Find the right information in the jungle of building information.
11. You as a builder-owner have to finance all building measures and conditions!
12. The wrong housing construction and the housing shortage
13. How is knowledge generated in the construction sector?